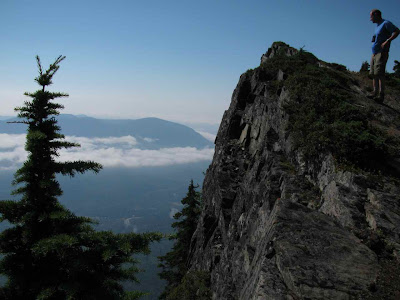 Yesterday we went up on the sixth Monday hike of the season, with two more left. Five of us went, those I have begun to think of as the Core Four (Al, Mike, Fred, me) plus Steve, a friend pictured above at the top point of the Mt. Higgins lookout. The hike was pretty strenuous, which I kind of expected when everything I read about it said it was "not for beginning hikers." They were right: there was plenty of exposure, both at the beginning and at the end, as you can see here, with Steve looking over a sheer cliff straight down into the Stillaquamish River Valley below. 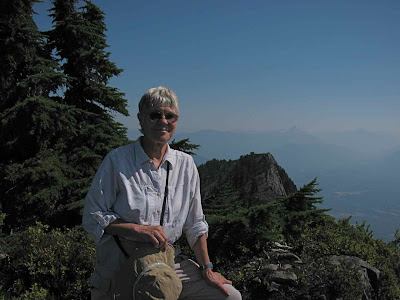 Fred took this picture of me, and as you can see, the views were obscured by haze, mostly caused by the forest fires raging in the mountains to the west. If you enlarge the picture you can just barely make out the peaks. When I went skydiving on Sunday and went up in the airplane, at about 7,000 feet we smelled the smoke and couldn't see the mountains until we were above the haze. There are definitely picturesque mountains behind me, but they are pretty much obscured. 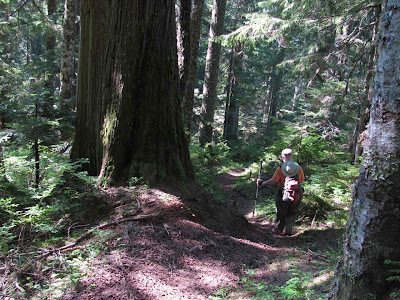 The hike starts at a pretty low elevation and climbs very steeply for the first mile before we entered this beautiful old growth forest. It was shady and the temperature was just about right, and the bugs were present but not terrible as I had feared. For a couple miles we walked in dappled sunlight until we began the push up the last mile, also very steep and unrelenting. We saw this lovely little cairn marking the trail at one point. 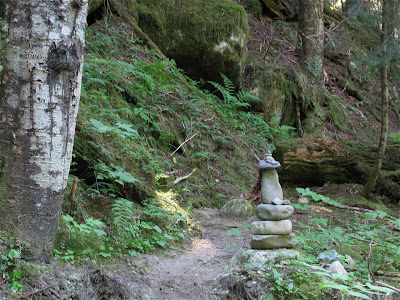 It almost looked to me like a zen garden. We still had another 2,000 feet elevation to climb from this point, but once we got to the lookout, it was really worth it. I think I'd like to come back and make this climb again when the air is clear, but until then, I'll just be happy that we had such a nice day together. 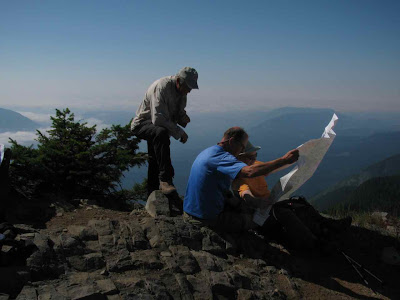 We hiked almost nine miles and climbed and descended more than 3,700 feet of elevation. This place at the top is at 4,850 feet. After our descent, which for me was harder than the ascent (my knees were really complaining by the end), we headed to a Mexican restaurant in Arlington and I enjoyed an ice-cold beer and chili relleno. All in all, a good day, and this morning after a good night's rest, I feel great! I took my last antibiotic pill this morning and believe that by Thursday's hike I should be completely well!
:-)
Posted by DJan at 7:08 AM