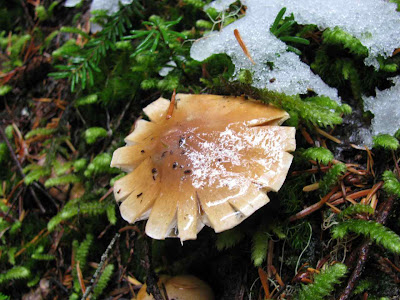 Today only seven of us diehard Senior Trailblazers showed up for the hike to what was advertised as the "Middle Fork area." It was raining when we woke up. And rain was forecast for most of the day. (Actually one other Trailblazer showed up but promptly left before we decided where to go.) Nobody really wanted to go on a hike around town, because none of us were truly ready to give up on the High Country. After a fairly long discussion, we decided to head up the Mt. Baker Highway and go up to Church Mountain, for our third time this season. 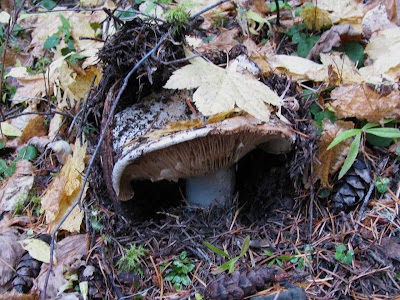 We hit the trail by 9:40 am without our rain gear on, as it was only spitting very lightly when we started out. Of course every one of us was prepared to throw on plenty of rain gear, but it wasn't really needed. I began to notice a preponderance of mushrooms of every sort, pushing up through the ground with little heed for the mulch and leaves on top. This picture looked to me like just the sort of place a leprechaun would love to inhabit. 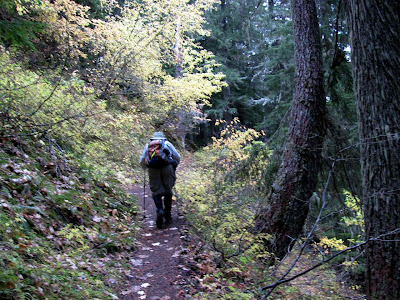 Our hike started out at 2,300 feet elevation, through yellow leaves and occasional low light shining through. I managed to keep our hike to a slow crawl as I would spy more and more mushrooms to photograph. There was such a profusion, and my friends began to discourage me from taking more pictures so we could actually make some progress up the steady grade. We climbed through 17 switchbacks on our way to the meadow. 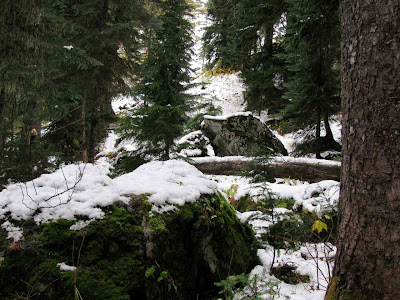 At about 4,300 feet, we began to see evidence of the recent snowfall here in the High Country. It was very wet snow and would have been perfect for a snowball fight, but we kept climbing. The trail is very good, with nobody ready to turn back. It wasn't even lunchtime yet! But the higher we went, the more snow we encountered. 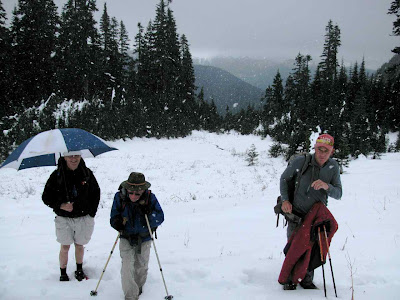 By the time we reached the meadow and 4,800 feet of elevation, it was snowing, and we were walking through snow up to the top of our boots. In some places it was even deeper. Here's Mikey Poppins with his umbrella and shorts while the rest of us are donning our coats, gloves and winter hats. Mike, Earl and Fred are already thinking about lunch. Since it was breezy and NOT WARM here, we retreated a couple  hundred feet and stopped for lunch. In no time at all, we were all very cold and ready to head back down. 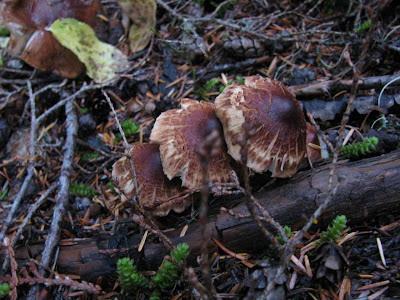 I managed to get more pictures of the myriad mushrooms on the trail (more of which are available if you click on the "Trailblazers Fall 2010" link in the right-hand side of this blog) as we descended out of the snow back into more hiker-friendly terrain. I noticed that Fred kept hanging back, but as we descended further, I wondered who had joined our group: 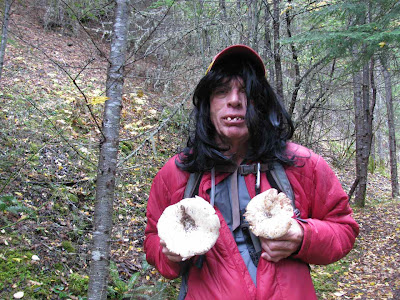 He looked vaguely familiar, had picked up some shrooms, but I really didn't recognize him. It was a Sasquatch from the Pacific Northwest! Okay, I'm new to the area. When someone suggested this was a Sasquatch, I said I didn't want to hurt anybody's feelings, thinking this was the name of a PNW tribe, but it's the name of BIGFOOT here in the PNW!! Then he revealed himself as none other than FRED from our group. You can easily see why I was fooled. But I was even more fooled when I realized I didn't know who Sasquatch is. That link will tell you, if you don't already know.

It was a great day, with more than six miles in our High Country, with snowshrooms, Sasquatch, and weather better than we had hoped for!
:-)
Posted by DJan at 5:14 PM