When the frost is on the pumpkin 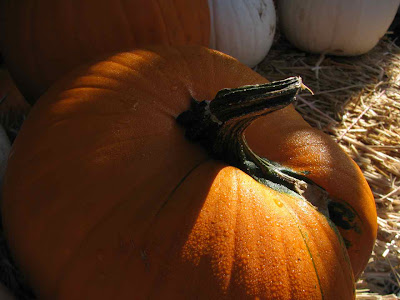 This morning after my workout, I walked to the Community Food Co-op (which I do most days) and saw their outside display of pumpkins covered with water. I assumed it was frost that had melted from the rising temperature and sunshine. But it only got down to 39 degrees (above freezing) and the dewpoint was also 39, so what I'm thinking is that this is dew, not melted frost. Oh, well, it's close enough to being frost to make me feel the changing season.

We are losing three-and-a-half minutes every day here in the uppermost left-hand corner of the United States, just a little south of Vancouver, BC. The days are now shorter than the nights, and you can feel and see the change of season everywhere. It's October, after all, and even if there wasn't frost on these guys last night, you can bet it won't be long now. I love this time of the year. The sky seems bluer in comparison to the bright leaves, and the crisp bite in the air is exhilarating.

I've got juncos returning to my porch after being gone all summer. They must be migrating south, although some stay around all winter. Maybe this is as far south as they go. They have joined my usual goldfinches, chickadees, nuthatches, flickers, downy woodpeckers and sparrows. I'm sorry, but to me those sparrows just have no redeeming qualities. Those people who brought them over here from overseas (to control insect pests) in the 1850s couldn't have foreseen how adaptable they are, or how quickly they would crowd out native species. I end up feeding them, too, since they don't care how I feel about them and travel around in rapacious flocks.

The other day when I was filling the black-oil sunflower seed feeder, I was getting ready to hang it back up on its peg when a nuthatch landed on the feeder inches from my face. I was still holding it. He seemed to be looking right into my eyes, showing no fear or skittishness. He waited for me to say something and I told him how much I admire him. He said, "tsip tsip tsip" to me, took a sunflower seed from right under my nose and flew off. Although I don't speak nuthatch, I think he was saying thank you.
:-)
Posted by DJan at 1:51 PM