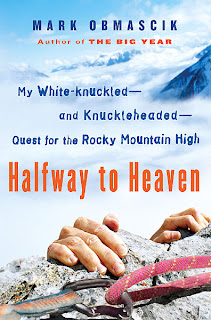 My sister Norma Jean knows that when I lived in Colorado, I had spent quite a few years climbing Fourteeners -- peaks at least 14,000 feet high -- before becoming distracted by my obsession with skydiving. She read Halfway to Heaven and told me how much she enjoyed the book. Although she has no interest in climbing any of these herself, it entertained her and retained her interest because of the great writing style of the author, Mark Obmascik. He gives a little description of himself on the book jacket as being "fat, forty-four, father of three sons, and facing a vasectomy" when he decided to try some male bonding with his son by hiking a peak together.

And then, in what he describes as a fit of insanity, he decided to try climbing all fifty-four of the Fourteeners in one year! Only a select few have accomplished the feat. The book tells of his adventures.

Some of the reviews call it a "hilarious midlife picaresque" or an "oxygen-deprived romp," or a "coming of middle-age adventure story." These descriptions are all true, and I've enjoyed the book a great deal. Obmascik's way of writing captivated me from the beginning, and since I've climbed several of these peaks myself, I was interested in finding out how he dealt with the difficulties I also faced. Climbing some of these peaks is simply dealing with hiking up several thousand feet of elevation gain while at altitude. Most start somewhere above 10,000 feet and you just grunt and sweat and keep going until you're at the summit.

Obmascik tells in his chapter on "Gravity" about one guy he climbed with who "has only six more Fourteeners to go, but they are all either hard physically, or hard technically, or simply hard both ways. Now that silver has completed its hostile takeover of his scalp, he wonders how many more hard peaks his legs can withstand." No kidding.

It's true that there are some hard and fast rules that everyone who is successful at climbing these peaks follows: you start really early, before dawn, get up to the summit before noon, and climb back down by early afternoon. In the High Country, thunderstorms are a real danger and build almost every afternoon. Most fatalities in Colorado are from falls or lightning strikes. I've been in a few sticky situations myself. On my other blog I wrote about some dumb things I did while learning the ropes.

Here in Washington state, all the hikes I do are tame in comparison to Colorado's Fourteeners, but people still die from falls and from getting lost. However, we start our hikes from somewhere around 3,000-4,000 feet and climb up to 6,000 or so, maximum. Big difference. I'm not sure how I would fare if I tried to climb Fourteeners today. 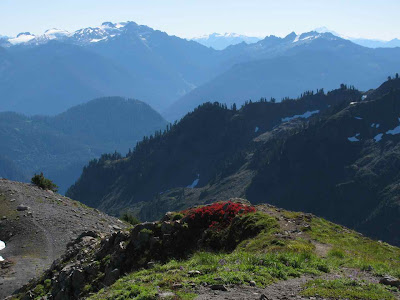 If you read about Mark's adventures in his book, you wil definitely be entertained. The Cascades, for me, are exciting enough, and beautiful, to boot. This picture was taken last Thursday on Ptarmigan Ridge, and I feel the same wonder and challenge from them today that I got from Colorado's Fourteeners thirty years ago.
:-)
Posted by DJan at 2:33 PM