I couldn't help myself

Even though I am still recovering from my cold, I got a call from Linny that she and Christine would be out at the Dropzone at Snohomish on Saturday and would I like to join them for a few jumps? Well, when I got the call on Friday, I was sure I wouldn't be joining them. But since I got a wonderful massage after my workout on Friday and a good night's sleep, this morning when I woke, I figured it was at least worth a trip 75 miles south for the possibility of a jump or two. After all, it has been three weeks, and the season is closing fast.

Linny was really surprised to see me, after I had left her a voice mail with a message that I would try but made no promises. This morning I felt so much better that Smart Guy and I headed to the DZ in hopes that I would be able to make at least one skydive before realizing I was really too sick. Linny got Christine and me to join her on the second load of the day for a wonderful three-way skydive that will live in my memory for a long time. I then got myself on a jump with Hank, a fun guy in our age range, and after packing and getting ready for a second jump, I found myself on a fun two-way with him that had every sign of me being completely well. But on the descent in freefall, my ears complained and when I opened my canopy, oh my, I realized it was NOT okay. Felt like an icepick in my right ear. After landing and thanking Hank for the wonderful jump, I asked Smart Guy if we could just go home. 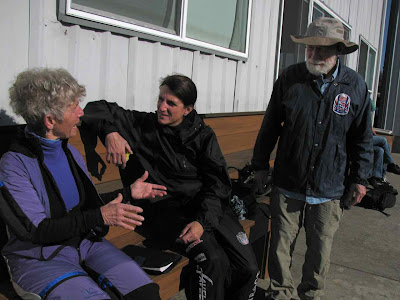 Well, he still had to find out from Linny what the best way would be for him to wash his rig. Here she is telling him all the secret stuff about how to get it clean (Woolite, Spray-n-Wash, soaking in the bathtub). She used to wash her own rig every winter, but now it's only now and then. After hearing all the important parts, I asked if we could go home so I could hopefully recover from what was probably a bad idea. My croaky voice had returned, my ear ached, and I was so tired I couldn't even imagine why I thought I was well enough to do this.

But actually, I had two wonderful skydives to add to my memories, and now I'm home writing about it. And tomorrow I will rest, I promise! However, next week I might be able to get two hikes in before calling it a season...
:-)
Posted by DJan at 4:55 PM