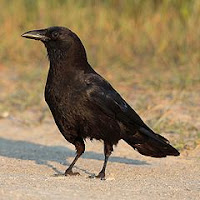 This morning I saw that one of my pine siskins was sick, huddled in the feeder with head tucked away. The other birds paid little attention and didn't seem to care (but I guess they don't, do they?).

I care, and as I filled the bird feeders, I left the little sick one alone, hoping that with good water and food maybe he would get better. It's possible, although siskins are susceptible to salmonella and sometimes die off in large numbers. I keep my feeders clean and when I see a sick one I use bleach water to clean, more often than usual. I watched him and wondered how I could make him more comfortable. He hopped weakly over to the water and then sat motionless in the middle of the porch.

While I sat inside sending thoughts of healing to the bird, a big crow flew up to the railing and eyed the little bird. I immediately went out to the porch and sent the crow packing. It was obvious to me that he saw an opportunity for a quick meal.

I also have an ongoing kerfuffle with the squirrels. They want that birdseed for themselves, and since they cannot reach the feeders (but they sure try), they come onto the porch looking for droppings underneath the feeders -- and those birds do cooperate; when they are on the feeders, seeds are a-flyin'. We have a whole family of squirrels visiting us. I was on the porch shooing away the squirrels when I saw the little sick bird on the ground. The crow had returned, and he swooped down, put his great huge foot on the little creature and scooped up the bird in his beak. Just my luck to see it... if I had not seen it, I could have believed that my little bird recovered.

But he was carried off to an adjoining roof for a feast. Now the crow seems to think he's found a place to catch other birds, since he's been back many times since, sitting in the tree and watching the birds eat and play. The crow flies away with a long swooping arc, his wingspread close to three feet. Now I know where all those spooky stories about ravens and crows come from: they are opportunistic feeders and apparently never forget a food site. Well, I don't think he can catch a healthy bird.