You're Going to Skydive? 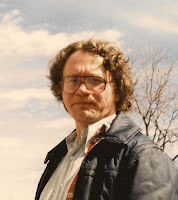 In the early 1990s, two friends of mine died suddenly, and rather unexpectedly. One, Robert, died of AIDS, and although he was sick for a long time, it wasn't until his final few months that he began to deteriorate. I was one of his caregivers, and I would see him a couple of times a week, ask him what he needed, give him foot rubs and read to him. I loved him like a sister, and he knew it. For years we hung out together, and he would tell me of his exploits (well, at least some of them).

He introduced me to Emily Dickinson in the early 1980s when I rented a room from him and his partner. Back then, I came home from a month-long trip to Peru with hepatitis A and Robert took wonderful care of me. He brought me books, fed me good food, and basically made my two months of home care bearable. We became really good friends.

I was so sad when he died that I decided I wanted to face the fear of death, as I had dealt with the fact of someone close to me dying, and I knew someday it would come to me. I decided to make a skydive as a memorial to Robert. He died in the spring, and in order to get maximum benefit from the ordeal, I would wait until fall, and see what thoughts and issues emerged in the meantime. In a way, it felt like if I were able to leap from an airplane, it would symbolize leaping into the unknown.

The lag between decision time (making an appointment at the local Drop Zone to make a tandem jump) and the actual event also let me milk it, announcing my intention to friends and family. Of course lots of people were horrified; I was already in my late 40s and it was considered quite daring, even a tandem jump. My mother, however, when I told her, "Well mom, I just wanted to call you and say goodbye, just in case something happens to me, even though it probably won't." She was unflappable, and said,"Oh, you'll love it and spend all your money on it." She really wasn't even frightened a little bit for me!

But of course she was right. She knew me pretty well. Nightmares for the last week before the jump had me kneeling in the doorway of the airplane, begging my instructor not to make me do it, a yawning chasm of darkness waiting to swallow me up. I showed up at the Drop Zone and met my instructor and proceeded to ask question after question, hoping to delay the inevitable.

But it was time, and I boarded a small Cessna with three other people, one of whom would exit early, making a jump from a lower altitude. He could tell how nervous I was, so he tried to calm me by telling me that he had made over 3,000 jumps himself, and that the way I was feeling was perfectly normal. The tiny plane took off, with me sitting on the floor in front of my instructor, and when we were about 3,000 feet above the ground, Mike (the solo jumper) rolled the canvas door up and looked out. I shrank from the enormous hole that had appeared in the side of the plane. Looking back over his shoulder at me, a big smile splitting his face, he leapt out of the side of the plane and looked back up at me, with two big "thumbs up" framing that smile.

The door rolled down again, we climbed the rest of the way to altitude. Once it was rolled up again I, strapped to my instructor's front side, exited the airplane at 12,000 feet above the ground. I remember the wind, the gasp of fear as I followed his instructions and entered freefall. We fell out of the airplane and began to ride the cushion of air. I was unaware of anything at this point, other than a sense of ecstatic otherness, because I was not dead, I was somewhere else, and time had become meaningless. Freefall was my whole existence.

I see a hand, pointing at the ripcord, and I remember that I am supposed to pull it, do something in this environment. I pull it and suddenly the freefall comes to an end. Amazingly, I am suspended under a beautiful rectangle of color, and my instructor's voice: "Well, how was it? Was it what you expected?"

No answer. I was transported, looking at the sky, the ground still far away from us, and feeling like I had survived a defining event in my life. We glided to the ground with a soft landing, and I was a changed person.

The non-skydiver in me had been peeled away, revealing the skydiver beneath. Within two months, I had completed a freefall program that allowed me to jump solo. Now, two decades later, I cannot imagine how my life would be without having made that first leap. I met my wonderful partner through skydiving, whom I married in freefall, and having made another 4,000 skydives to this date, I now write about it for you. This is our wedding portrait in 1994. Thank you for reading about this, and I hope, truly hope, that life brings you something as fulfilling as skydiving has been to me. 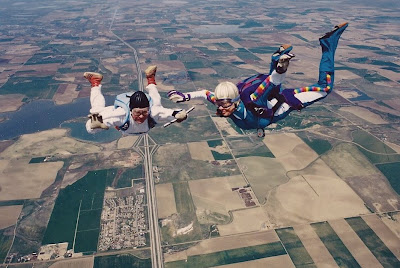