Patron Saint of the Internet 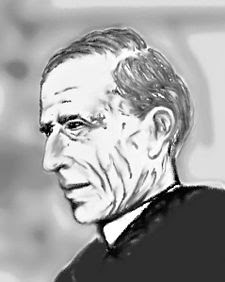 Long ago, when I was a young woman, I read a fair amount of philosophy. I got started by being turned on to Carl Jung, and I read his treatises avidly. Then I branched out to explore some of the other more esoteric minds, like that of Pierre Teilhard de Chardin. He is often referred to as the Patron Saint of the Internet. Why?

Well, because he was one of a few people who thought of the universe as consisting of three parts: the geosphere (inanimate matter), the biosphere (biological life), and the noosphere (human thought). I was absolutely fascinated by his description of human thought as being born out of the other two, and leading to... where? From Wikipedia:

For Teilhard, the noosphere is best described as a sort of 'collective consciousness' of human beings. It emerges from the interaction of human minds. The noosphere has grown in step with the organization of the human mass in relation to itself as it populates the earth. As mankind organizes itself in more complex social networks, the higher the noosphere will grow in awareness. This is an extension of Teilhard's Law of Complexity/Consciousness, the law describing the nature of evolution in the universe.

Wow! I remember how deeply this impacted me then. And now, at least four decades later, I am sitting here, at this computer, blogging. In other words, I am creating the next step in evolution, according to Teilhard. I am also quite aware of the enormity of what I am saying. If evolution indeed exists, and everything points in that direction, then we, fellow bloggers, are in the process of creating something that has not existed before, at this point in time. Just like other authors before us who created stories out of their imaginations, we are creating a universe of connectivity out of ours.

I got a wonderful email from a fellow blogger this morning, who asked me to tell her a bit about my life, telling me how different my journey is from hers, and I was dumbfounded to find that parts of my life that I take for granted are not part of her own life. I have been an exercise fanatic for so long that I can barely imagine my life without it. It's been almost two decades since I made that first fateful leap into freefall. And my years as a hippie are also not part of her consciousness, not part of what she knows.

This gives me a chance to examine, articulate, and express here, in the blog, what I know. And in the process, I will have added my own existence to hers, while I fly through this blog and that blog, adding other experiences to my own, and thereby changing mine as I integrate new ideas, new ways of thinking. I am truly excited by the possibilities ahead. And, to quote my favorite poet (one paragraph of three) that states this fact with eloquence:

Through this prose, I examine the Possibilities ahead and transform my mental landscape. Thank you for joining me on this journey, fellow bloggers, and who knows where we are headed? Do we have any limits?
Posted by DJan at 1:17 PM