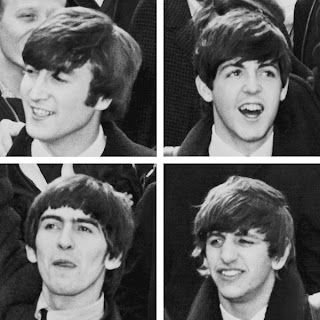 On Facebook, one of my relatives, who played in a band and can't be even 30 years old yet (Matt), asked people to list 25 albums that have influenced their lives. I think he said something like having "changed the way you think of things." Hmmm...

This morning I worked out with my usual Tuesday morning friends. The music we lifted weights to was a CD of the Beatles. Music I've known for 40 years or so, that I hear in elevators as Musak, in gym class, and interestingly, when I walked into the local bakery today for a loaf of bread, the Beatles were playing overhead. Now that's so pervasive that I wonder how I could classify the music of the Beatles as having changing the way I think of things. But it has, definitely.

It was in the 1970s when I first heard of the Beatles. As a young mother and then as a young divorced mother, I was oblivious to any contemporary music for several years. When I was a teenager, however, I well remember the first album I bought: Fats Domino's My Blue Heaven. I had my own record player, and this was a 78 rpm record. Perhaps the reason I remember it so vividly was that shortly after buying it and proudly laying it on my bed, I sat on it and broke it in half. I must have played it a few times, because I still remember the songs and the raspy voice I loved.

In the 1970s I had an opportunity to go back and experience what I had missed while having babies: the Psychedelic Era. I joined a hippie commune in California and sent my son to live with his father in Michigan. During this period, I learned about music and was introduced to the Beatles. We listened spellbound to two albums in particular: the White Album and Sgt. Pepper. I loved those two especially. I just looked up the reference in Wikipedia, and I was struck by this quote:

On the 40th anniversary of the album's release the Vatican issued an unusual review of the album. The official Vatican newspaper, L'Osservatore Romano published a lengthy article which declared that "Forty years later, this album remains a type of magical musical anthology: 30 songs you can go through and listen to at will, certain of finding some pearls that even today remain unparalleled." Forgiving John Lennon's "more popular than Jesus" slight, the paper called the White Album the "creative summit" of the Beatles' career, comparing it favorably to contemporary music and taking note of the now antiquated equipment used, concluding that "a listening experience like that offered by the Beatles is truly rare."

That 40th anniversary was last year (2008), and you still hear the music everywhere. Who doesn't know about the Beatles? Who isn't continually struck by their lyrics, when you accidentally hear a phrase that strikes you as new and you wonder what it means?

I asked the young clerk at the bakery how old she is, and she replied, "Twenty-six." This means that she was born in the 1980s, so I asked her if she knew what music she was listening to. She said, "Sure! It's the Beatles. I've got a video game of theirs."