Ooops. As a retired writer/editor, I know how easy it is to have something like this happen, but someone (or several someones) who should have caught it are red-faced today. This was yesterday's Bellingham Herald, and it is not known for being much of a paper anyway. I usually read it at the coffee shop in just a few minutes and refuse to pay for a subscription. Now I can no longer read any of the articles on line, either, as they are now requiring me to subscribe for the privilege! Sigh. I will probably break down and do it, unless I can find a work-around. It was a very wet Ski to Sea event, with steady rain falling. (NB: Linda Reeder pointed out that I had written "Ski to Ski" in the previous sentence and missed it!) That picture on the front of the poor cross-country skiers dealing with the soggy snow made for a good photo op, in any case. 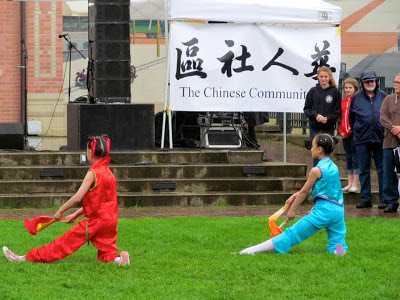 Although it's hard to tell how wet these young ladies were as they performed, they gave a wonderful performance at the Ski to Sea festival in downtown Fairhaven on Sunday. As the thousands of racers in the event struggled in the rain, the festival was still very well attended. Smart Guy and I went down there specifically to watch the seven dances put on by the Chinese community, but we got so wet and the music was so loud, we decided to leave afterwards. I didn't take any pictures at the finish line, as I usually do, because I simply wanted to get warm and dry somewhere, and that wasn't happening outside on Sunday. 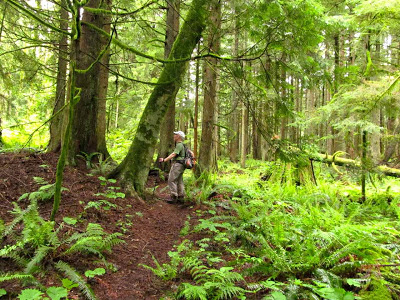 Yesterday, Monday (which felt like another Sunday), Al and I went on a hike on Stewart Mountain. At first we were going to head to the High Country, but the weather forecast looked rather dubious for the afternoon. So instead of a long drive, we went up to check out the condition of the trail on the north side of the mountain. There was plenty of mud, lots of stinging nettles, and by noon, we had rain. We didn't go the entire way but got a nice seven-mile hike before we finished by 1:00pm. The weather deteriorated for the rest of the day, but I was happy to have been out and about. On Memorial Day, the Y is closed, the buses don't run, and I needed to be outdoors for awhile. It was perfect. 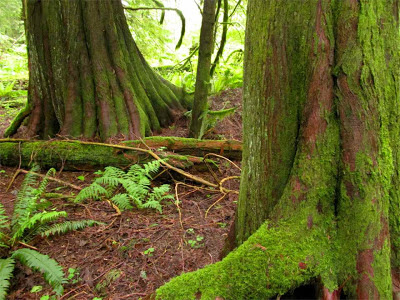 These red and green cedars caught my eye. They remind me of the Ents in the Lord of the Rings books. We will be back on this particular stretch of trail quite soon, I think, since we will need to make some alterations in the schedule until that stretch of bridge is fixed. Have a good day and I hope it's drier where you are: we have several more days of rain in the forecast.
:-)
Posted by DJan at 7:01 AM