Lake Padden and a party

Every year for the past six years, Norm and Gina have hosted a Memorial Day weekend party at their summer home on Cain Lake. We begin the day with a short hike at Lake Padden (a mere six miles) on the horse trails that are located behind the lake. Since there are so many possible paths to take, a map is located at each intersection. 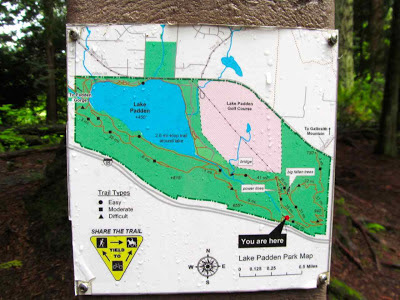 If you enlarge this, you can read the text, but basically there is a "You are here" marking that shows where one is located in relation to the lake and the golf course. This is also a place where dogs are allowed to run free, and there's a dog park near the golf course as well. The area was filled with lots of people and their dogs today, since the weather turned out to be pretty nice, considering. It rained all night long, so it was rather muddy, but we had clouds and sunshine as more than a dozen of us laughed and chatted along behind Al. 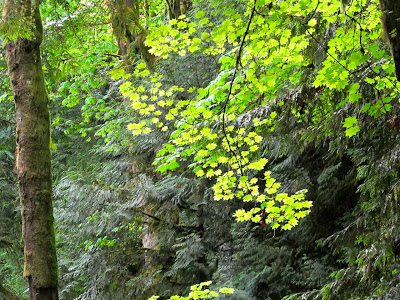 The fresh green leaves that have recently appeared were so pretty against the older greenery. It wasn't exactly warm, but as we were moving along at a fairly brisk pace, I wasn't cold at all. My raincoat stayed in my pack. We also didn't need to carry any lunch, since we would be piling in our cars and driving to Norm and Gina's home to be treated to hot dogs, hamburgers and some wonderful salads for the vegetarians among us. We were told only to bring our drinks and a dessert.
This bowl kept magically refilling itself and I myself had two enormous servings. Since everyone brought desserts, there were plenty of those, too, and (as usual) a special cake for the birthday girls, Amy and Peggy. Ward's birthday is in May, too, so he was required to be photographed along with them.
The cake was very pretty, and Amy asked if I would take a closeup for posterity, so here it is. I didn't have any of it, since I had already indulged in some of the other goodies and was feeling a little bit of a sugar rush. Since I rarely eat any sugar, it doesn't take much.
Both of the hiking groups were invited, so we had somewhere around forty Senior Trailblazers enjoying each other's company and being treated to lunch. I was so pleased to see that Jonelle has returned from her winter digs in the desert to join us for our upcoming hikes in the wilderness. 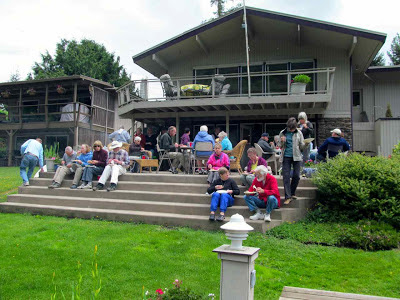 This may be the last time we gather here at Norm and Gina's summer home, as they are threatening to sell it, and we will need to find another place to gather to begin our summer hiking season. All things must come to an end, but being able to enjoy the moment with such wonderful friends is enough for me today.
:-)
Posted by DJan at 3:26 PM