Only five of us showed up for the hike today, rated "hard" and boy is it! I looked up our crew last year, and there were only five then, too. Most people don't particularly like to climb an almost 12% grade for the first three miles and then add on another six miles after that. But the hardiest of the hardy showed up on another glorious weather day. It was Mikey's first time wearing his new boots, which were on sale because of the color. Except for the next one, all these pictures are from my iPhone, since I had to document the event somehow and had forgotten to bring my camera.
When we left the Senior Center, we were beginning to see blue sky through the marine layer that had moved in during the night, but as we began our hike, we ended up being in some pretty dense fog, keeping the temperatures down and making the upward part of the hike more comfortable as we grunted and groaned up the steep grade. The fog began to lift as we ascended, making for some dramatic shots through the trees. 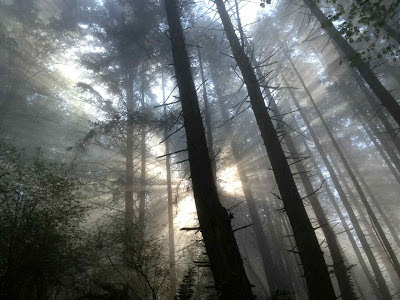 As we headed upwards, we were convinced that the marine layer had dissipated and that we would have a cool view of Samish Bay once we reached Oyster Dome. But here is what we saw instead: 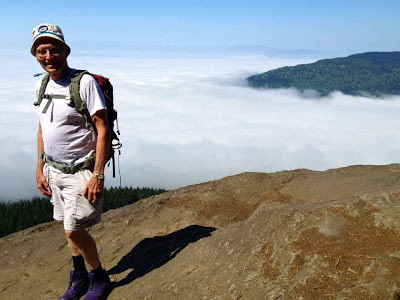 We had simply climbed up above the marine layer, which was still very compact at 11:00am when we got to the Dome. If you want to know why it's called "Oyster Dome," read my post from last year where I explained it (towards the end of the post). 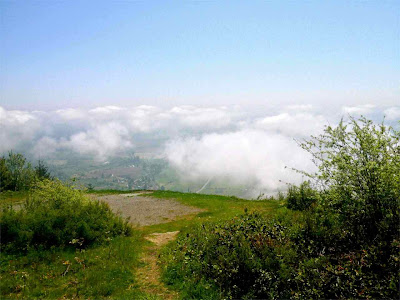 By the time we had hiked to the Samish Bay Overlook, the clouds were almost gone, as you can see here. Although I've got lots of wonderful pictures of the bay, today's shot was just to show how long it took for the marine layer to lift (it was after 1:00pm when I took this picture). We met lots of people just starting up as we headed back down, and we were plenty tired and ready for a rest by the time we reached the cars. We hiked almost nine miles and covered a total of just under 2,500 feet of elevation up and down. There's a reason it's labeled "hard," and now that my feet are up, my wine glass is in my hand, and my post is almost finished, I'm smiling!
:-)
Posted by DJan at 4:48 PM