How could I NOT have heard about Aldo Leopold before now? When I won the book from Far Side of Fifty last week (A Sand County Almanac by Aldo Leopold), I entered a new and exciting part of the universe that I didn't know anything about. That first link will tell you everything about Leopold, but here's the short version. He was born in 1887 and lived to the age of 61; he died in 1948. The book for which he is famous was published posthumously by his son in 1949. Leopold died of a heart attack while helping a neighbor fight a wildfire.

In the early 1920s, he was assigned to hunt and kill bears, wolves, and mountain lions in New Mexico. He learned to respect these animals and came to realize their important place in the ecosystem. From that link:


In 1935 he helped found the Wilderness Society, dedicated to expanding and protecting the nation's wilderness areas. He regarded the society as "one of the focal points of a new attitude—an intelligent humility toward man's place in nature."


We were eating lunch on a high rimrock, at the foot of which a turbulent river elbowed the way. We saw what we thought was a doe fording the torrent, her breast awash in white water. When she climbed the bank toward us and shook out her tail, we realized our error: it was a wolf. A half-dozen others, evidently grown pups, sprang from the willows and all joined in a welcoming melee of wagging tails and playful maulings. What was literally a pile of wolves writhed and tumbled in the center of an open flat at the foot of our rimrock.

In those days we had never heard of passing up a chance to kill a wolf. In a second we were pumping lead into the pack, but with more excitement than accuracy: how to aim a steep downhill shot is always confusing. When our rifles were empty, the old wolf was down, and a pup was dragging a leg into impassable slide rocks.

We reached the old wolf in time to watch a fierce green fire dying in her eyes. I realized then, and have known ever since, that there was something new to me in those eyes — something known only to her and to the mountain. I was young then, and full of trigger-itch; I thought that because fewer wolves meant more deer, that no wolves would mean hunters' paradise. But after seeing the green fire die, I sensed that neither the wolf nor the mountain agreed with such a view.

It took awhile, but Leopold began to realize that the integrity of the ecosystem in which we live requires wildlife.  There is now an Aldo Leopold Foundation, and his children and grandchildren have become naturalists and educators. He was truly a great man. Another quote from the Wikipedia link is from Bruce Babbitt, former Secretary of the Interior:


In January of 1995 I helped carry the first grey wolf into Yellowstone, where they had been eradicated by federal predator control policy only six decades earlier. Looking through the crate into her eyes, I reflected on how Aldo Leopold once took part in that policy, then eloquently challenged it. By illuminating for us how wolves play a critical role in the whole of creation, he expressed the ethic and the laws which would reintroduce them nearly a half-century after his death.

I have never seen a Grey Wolf but I have certainly heard them in the wild, and I'll bet you have, too. Thank you, Connie, for introducing me to Leopold's book. I am enjoying it immensely. She also sent me two lovely cards and said that she couldn't resist sending along a little bit of Minnesota too: both are pictures that she took, mounted on cards with included envelopes I can use to send to special people.
And then there's the book, a treasure indeed, that I will slip into and enjoy every second. The book is, as it says on the cover, "the classic statement of the joy and beauty found in a style of life that protects the environment." For someone who has seen only two bears (magnificent as they were) and mountain goats twice, I can attest to the feeling of majesty they impart to the wilderness. Here's a picture of the entire package I received: 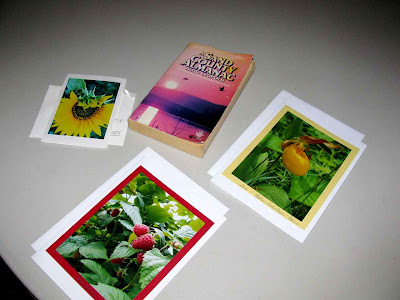 I didn't go for a hike today because of the possibility of getting in to see the doctor about my allergies, which have been driving me crazy. Instead, I'm sitting here in the middle of the afternoon writing this post, and enjoying "A Sand County Almanac." I didn't realize how lucky I was, and I'm so happy to be able to share it with my blogging friends.
:-)
Posted by DJan at 1:55 PM