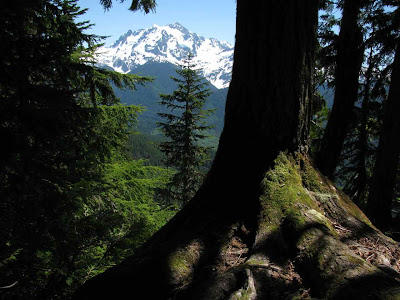 You may be wondering why I am writing about a hike I took on a Tuesday! The Trailblazer leaders are beginning to add a few extra hikes to the first part of the week (Monday or Tuesday), but when Al sent out an email request for people to join him today, I was the only one who responded. However, an inveterate couple of hikers named Verne and Kathy joined the two of us to make a foursome that hiked the Keep Cool trail today.

I first learned about this trail when Al wrote about it on his blog here. He hiked it last September for the first time, which was a good thing. It meant he had a GPS track of the trail, which was clear of snow when he covered it last year. Today, not so much. The picture above was taken at the beginning of the hike, at about 3,000 feet elevation. By the time we had gone no more than a mile on this sketchy trail, we hit snow. 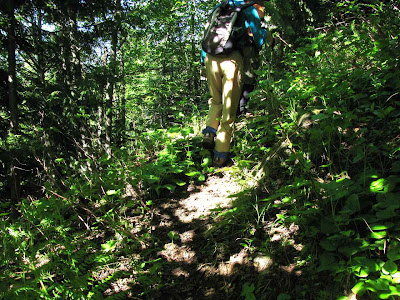 The day was sunny and glorious. As you can see from this picture, the trail is not always obvious, as it is no longer maintained by the Forest Service. It goes to Yellow Aster Butte, but it is only used these days by people who are long-time hikers. (You can find out more by going to Al's link.) Today, we ran into snow and lost the trail at about 4,000 feet. Verne's route-finding skills are considerable, as he's been on this trip many times, but Al kept telling us when we veered off the trail by a fair amount. We could hear a stream rushing by, and we knew we should be close to it, but we wanted to avoid falling through the snow in scenes like this: 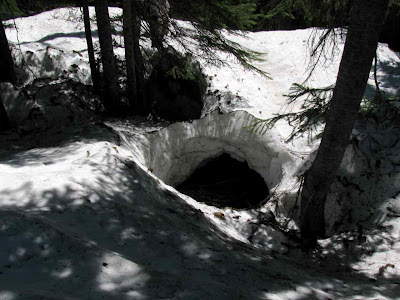 It's not unusual for streams to undercut snow cover like this, but it is not a good idea to get too close or worse yet, fall into one of these sink holes. So we were careful, and finally we gained the "meadow" (or what will be a meadow when all the snow is gone). 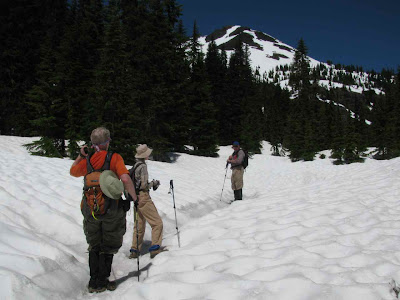 By this time, it was time for us to stop and have some lunch. I would say we were standing on at least five and possibly ten feet of snow. I do know we had stopped seeing any signs of ground beneath our feet a while before we got to this place. Al, Kathy, and Verne (and I) all agreed to sit down in a nice bit of shade and have some lunch. We looked around and identified all the peaks we could see. 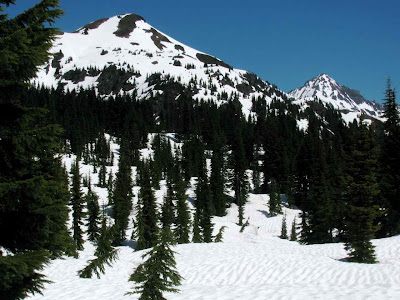 The highest peak in this picture is Yellow Aster Butte, which is currently impassable because of snow. The smaller peak to the right is called Larrabee Peak. As you can see, it will be a LONG TIME before we will be able to gain access to the Butte this year. The snow is so much deeper than it was this time last year, and the flowers that will burst forth when it's gone will not be in bloom any time soon. Although this makes me sad, I couldn't complain too much as we headed back down the trail and ran into ground (and foliage) again. I took this picture of a blossom that shows much promise. 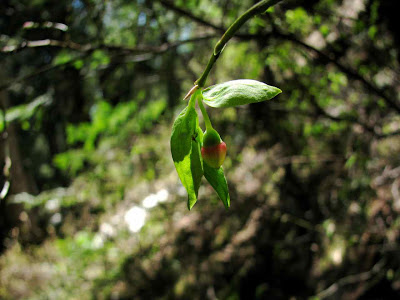 All in all, I had a great day in the Mt. Baker wilderness area with Al and two new friends, and on Thursday I will get to be with my other Trailblazer friends for a hike into... yes, snow. It's everywhere around here and unavoidable for most of the summer season. I'll just have to manage.
:-)
Posted by DJan at 6:13 PM