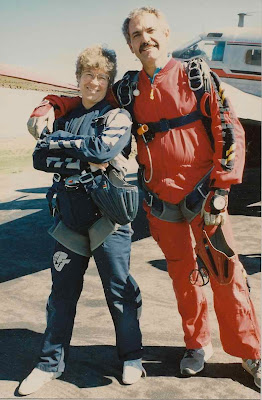 This picture was taken twenty years ago on September 3, 1990. It's a picture of me when I wasn't yet a skydiver, with my tandem instructor, Bill Jackson. I look pretty happy and laid back in this picture, but I wasn't at all; I was very nervous. We didn't get into that plane behind us but into a C-206, a very small plane that holds a maximum of six people. I wrote about how this all came about on my other blog, a post called "How I Became a Skydiver." If you're interested, you can read about it there.

For now, I'd like to examine the twenty years that have passed since that day in Loveland, Colorado. It's amazing to me when I look at that 47-year-old person and think about who I was then. I had been working at the National Center for Atmospheric Research in Boulder for more than a decade and had just recently begun working full time after years of sharing my job with another woman. Consequently, I had a little extra money.

Little did I know that before long, every last bit of that extra money would be poured into the Drop Zone (Skydive Colorado), because by November 10, 1990, I was certified to jump solo. I had to borrow from the bank for this endeavor, because even twenty years ago, it was not cheap to get certified. Now it's probably double what I paid to buy one's first gear and go through the certification.

Through skydiving, I met Smart Guy, and Bill Jackson ended up being our Best Man and videographer when we got married in freefall on May 5, 1994. On June 18, 1994, I received my certification to become an AFF (accelerated freefall) Instructor and I began to teach others how to skydive. Before I quit teaching in 2008, I taught more than 1,200 students.

In 1998, at the height of my addiction, I made 401 skydives in one year. Now, with more than 4,000 skydives under my belt, I no longer feel driven to be at the Drop Zone every moment that looks even possibly jump-able. I do see others at Skydive Snohomish here in Washington State that are hooked like I was, and I see them living through it now.

As Smart Guy said to me once, "You can't have 100 jumps forever," meaning that the experience changes as you progress through it. Like all life events, hobbies, endeavors and addictions, the progression can be imperceptible as you evolve into something new, something else.

Today I am content to write on a beautiful Saturday (with enough clouds in the sky to make jumping dubious) about my experience and head out to the Farmers' Market instead.
:-)
Posted by DJan at 9:38 AM