One good tern deserves another 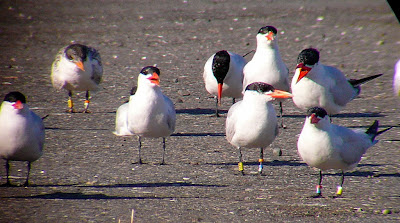 This summer Bellingham was inundated with Caspian Terns, the largest species of tern (link takes you to the Wikipedia site about them). Since I have become a birder myself, I joined the Whatcom County birders listserv a while back and regularly receive emails of sightings people have of various birds. The Caspian Terns that came to Bellingham this year are far in excess of the 2009 numbers, partly because of the collapse of their breeding grounds at the Dungeness National Wildlife Refuge near Sequim. Bald eagles and coyotes had been decimating the colony there, so the terns abandoned the site.

Joe Meche is President of the North Cascades Audubon Society and is a frequent correspondent to the listserv. The pictures I've got here are taken by him and shared through email. He put that first picture on to show that many of the birds have as many as three bands on them. He and 20 local volunteers captured, banded and released 252 Caspian Tern chicks on July 30. I have taken much of the information in this post from his newsletter article on Whatcom Watch Online: (To Everything Tern, Tern, Tern: Bellingham's Caspian Tern Summer). If you enlarge that picture, you can see the Bellingham bands (I think they are the cool orange ones). From that article linked above:


Some of the bands we read as we scanned the colony told us that birds were here from Dungeness and some from as far away as East Sand Island on the Columbia River, the Tri-cities area, southern Oregon, and the San Francisco Bay area. A real highlight for Ladd came when she spotted a bird that she had helped to band as a chick in early spring near Pasco! No one really knows how the word was spread among the birds about Bellingham, but they kept coming! One bird that was in the colony was banded on East Sand Island in 2001!

It is fascinating to speculate on how the birds let each other know where the happening place is to be found each summer. Before the summer was over, the colony here in Bellingham had become the second largest on the Pacific Coast. And this particular area they chose is scheduled for development by the City of Bellingham. Here's another Joe Meche picture: 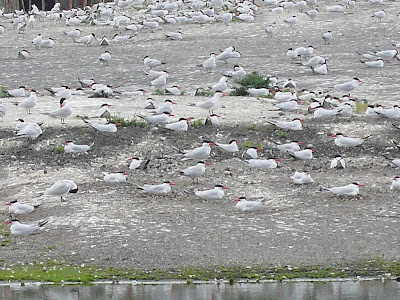 These birds are ground nesters, and it's amazing to me that they are able to find their own chicks again after flying out to the bay for fish. Caspian Terns fly over the water and dive-bomb right into the water. The fish don't have a chance. I enjoyed learning all about these birds during the summer, and I just this week received a picture of a Caspian Tern giving a farewell salute (also taken by Joe). 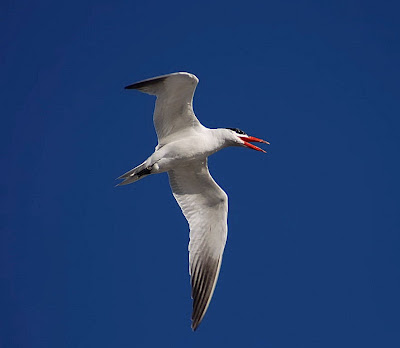 This magnificent bird looks to me like he's saying goodbye as he migrates to South America or wherever it is they finally end up for the winter months. I love the aerodynamic look of him as he tucks his legs into his body and allows those mighty wings to do their thing. The birders are calling this the Bellingham Summer of the Caspian Terns, since at least 700-1,000 new chicks flew off to parts unknown, born and bred right here in my own home town. More than 250 banded youngsters will tell us how many of them will return here next summer.
:-)
Posted by DJan at 12:19 PM