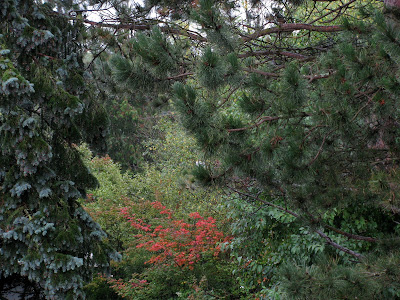 I took this picture just a few minutes ago from my front porch. As you can see, there's a bit of fall color showing up on one of the bushes near our apartment, and if you were able to stand here next to me, you would also be able to hear the rain, the soft gentle sound I listened to all during the night. It's supposed to rain all day. 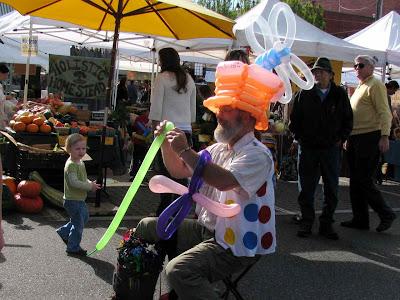 Yesterday, however, when I walked to the Farmers' Market, it was sunny, beautiful, and lots of people were out enjoying the sunshine. This balloon maker enchanted me with the cute dragonfly on his balloon hat. Apparently he is supplying some competition to the usual balloon guy at the Market. His right leg has lots of balloons strapped to it, ready to inflate for passersby.

The weather here in the Pacific Northwest is like that: sunny one day, rainy the next. I am getting ready to experience my third fall and winter season here and am bracing for a wet, cooler-than-normal season, according to Cliff Mass, who is projecting a moderate-to-strong La Niña event this winter. El Niño brings the opposite effect, and that's what we had last year: a mild, sunny winter and spring. Our weather didn't actually hit until May and June, so everything has been delayed in ripening. Seattle usually has 64 days of 70+ days in the spring and summer, and this year it has only been 35 (so far). The two hot spells masked the cool weather, with the average being skewed upward by six days over 90 degrees. 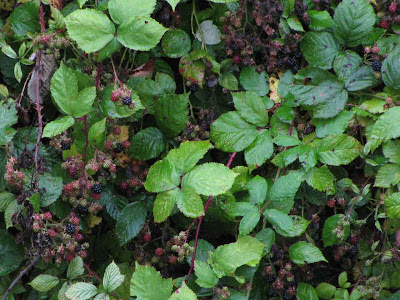 One plant has not been affected by the strange weather: the blackberries. We have an invasive species of Himalayan blackberry, Rubus armeniacus, which grows everywhere. This is from the Wikipedia link:


The species was introduced to Europe in 1835, and Australasia and North America in 1885. It was valued for its fruit, similar to that of common blackberries (Rubus fruticosus and allies); but larger and sweeter, making it a more attractive species for both domestic and commercial fruit production. The cultivars 'Himalayan Giant' and 'Theodore Reimers' are particularly commonly planted. The species soon escaped from cultivation and has become a serious invasive species in most of the temperate world.

This picture was taken from my porch. The area to the south of our apartment once had a chicken farm and is now an overgrown blackberry field. (I'm sure glad the chicken farm is gone! The vacant area also is home to many wildlife, including raccoons, skunks, and deer.) There's also some fireweed and other bushes I don't recognize.

Although the blackberry bushes are a scourge for most of the year, I found an article that talks about how they are viewed in this part of the world during harvest time. It's from the New York Times Diner's Journal about Himalayan Blackberries in the Pacific Northwest. I hope you read it; there's some humorous information about efforts to control the vines, as well as a wonderful blackberry pie recipe at the end.
:-)
Posted by DJan at 11:41 AM