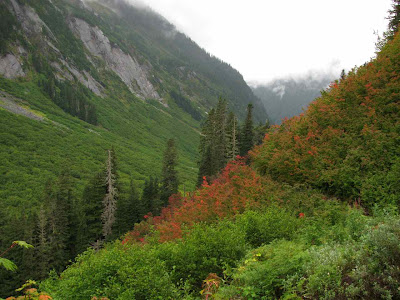 The Senior Trailblazers were scheduled to drive 75 miles south to hike up Rainbow Ridge, but the weather was very iffy, so we decided instead to attempt another assault on Hannegan Pass. While I was away last month on the East Coast, the Trailblazers headed up toward the pass during another questionable weather event (Geezerhiker wrote about it here), who described a very wet hike, with actual soaking rain that caused them to turn around and head back down before reaching the pass.

Today's forecast was not much better, but at least we would not be driving 75 miles to hike in the rain, so off we went up the Mt. Baker Highway. Only nine hardy souls showed up for this one, definitely a much lower number than usual. But we hike, rain or shine, on Thursday. The picture above shows that although it did rain on and off, it was quite beautiful with the fall colors and the view of the valley. After a short while, though, we had to stop and don our rain gear. 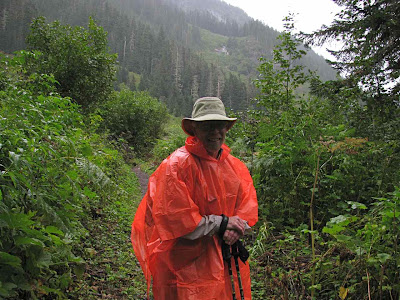 Al, our leader (also known as GeezerHiker), broke out a new rain poncho that assured us nobody would ever mistake us for a bear (it's that season again). The skies spit on us now and then, but as we headed up the 2,000 feet of elevation again, incredibly the sun broke out to cheer our spirits. 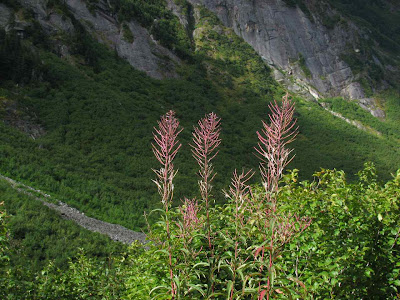 As you can see, the flowers of the fireweed are long gone, but the husks were in the sunshine while the background was in shadow, and I thought this picture showed the beauty of our surroundings quite well. The trail was very wet, much more so than it was last year (when I thought I would expire from heat stroke), and those few sun breaks were all we had for the entire day. 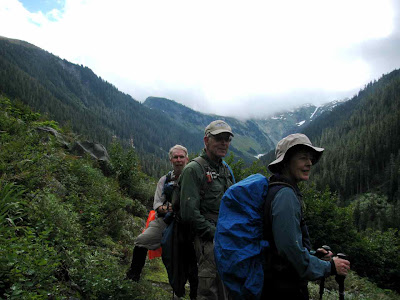 On the trail, I asked those ahead of me to stop so I could get a picture. Dan, in the middle here, is famous for all the pictures I've taken of him over the summer. That's Al behind him and Peggy on the right. With only nine of us, we set a pretty good pace and actually made it all the way to the pass. This is the view we had: 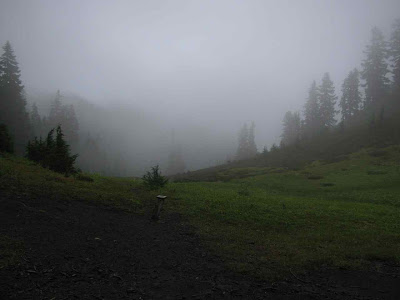 In other words, nothing. No view. And the wind blew from this direction, making us, the wet and tired hikers, quite cold and uncomfortable in no time. Fortunately, everyone on the hike today had rain gear and cold weather gear. We threw on our warm clothes, including gloves, stamped and huffed for a very few minutes after eating our lunch before heading back down the trail. By the time we reached our cars, we were all warm and toasty from the exertion and ready to call it a day. Eight miles and then some, 2,000 feet up and down, and every kind of weather except warm and dry. In other words, a really good day with my buddies, average age of those on today's hike: around 70. Not bad. I've got a few years left, I'd say.
:-)
Posted by DJan at 5:59 PM