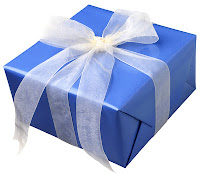 (This is a reprint from 2009. I figured I have different readers today and thought you might enjoy it as a Christmas present in 2012 from me to you.)

One year when I was home visiting my parents and siblings for the holidays, my sister Norma Jean and I went to Midnight Mass on Christmas Eve. I think I had been married for some time and away from home for awhile, but I really don't remember when it was for sure. My parents had two distinct families, and the youngest three were all six or under at this time, while Norma Jean and I were adults.

When we went out the door, Mama and Daddy had begun the Christmas Eve preparations for the young ones in the house (my brother and sisters) who had finally gone to bed. They had begun to assemble a bicycle for our brother Buz and had to finish wrapping and putting Santa's gifts under the tree. It was a warm and happy scene. Off we went to Midnight Mass.

When we returned, the scene was anything but happy. The entire living room was scattered with glasses half-covered in salt (from partially consumed margaritas), and the bike was still only half assembled in the living room. The entire scene was, in a word, a nightmare. And our parents had stumbled into their bedroom and crawled into bed. Apparently in the midst of their tasks, some friends had come over to visit and our parents had gotten quite drunk and forgotten what tonight meant to their young children.

We were aghast. For a few minutes we wandered through the living room and kitchen and wondered what to do. We decided that we would be Christmas elves and fix things. Norma Jean set to the task of reading directions on how to assemble the bicycle, and I began to clean things up: we toiled for several hours before we inspected our work and called it good. Norma Jean had learned how to follow arcane directions and actually put the bike together! (I was more impressed by this than I let on at the time.)

Well, in the morning the kids came downstairs to find that Santa had indeed come during the night, and that his elves had done their work quite well. It is one of the more satisfying Christmas memories that I share with my sister. We still smile about it. I had to write to Norma Jean to see if my memory of the event matched hers, and it pretty much did. She said,


Maybe that's where I got the start of loving the feeling of accomplishment when I read directions and put things together. . . . We cleaned up and set up the living room to be a real Christmas when everyone got up the next morning. It was certainly memorable.

Over the years, Christmas has lost much of its magic for me. I don't like what I see happening to Christmas these days, but I am sure that there are still many parents, and Santas, and elves, making things happen for others.
:-)
Posted by DJan at 5:58 AM