While perusing old pictures, we ran across the picture on the left, taken during a Thanksgiving gathering 16 or 17 years ago here in Texas. Norma Jean and I had bought novelty t-shirts with the saying "Two beers or not two beers: What was the question?" and hammed it up for the camera. Norma Jean arrived this week with the "Wines Constantly" t-shirt, and we embarked on a quest to find one for me so that we could re-create the experience for Thanksgiving 2012.

It was quite an adventure. We went to several malls and were given the idea that our best shot would be to try to find one in Grapevine, a nearby town with several wineries. We did indeed find one for me, but it was only after we had given up all hope. (Isn't that the way it always happens?) The first store we visited had some, but we didn't see this one. We decided to go back and have a wine tasting before heading home, and Norma Jean found the elusive shirt in a different section of the store. So today, Thanksgiving 2012, we decided to show in the above picture what happens when two dedicated beer drinkers turn to red wine. 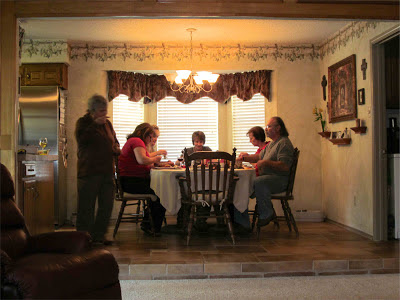 Other than the beer-to-wine conversion picture, we had a very nice, quiet Thanksgiving celebration with our siblings, my brother's wife Phyllis and her sister Kay, and PJ's husband Stewart. We ate and played some games, while Stewart watched (is still watching) a football game. So I crept into the bedroom to write this post and read my favorite blogs to share Thanksgiving with all of YOU as well.

I don't return home until Tuesday, but Norma Jean leaves early in the morning. We walked together every day but one, and I will miss her. I know, however, that she is anxious to return home to her own life and her little dog who will cover her with kisses when he sees her. I have missed the worst of the rain in Washington state (I'm hoping anyway) and am enjoying the sunshine and warm temperatures here in Texas very much. I am sending you love and my most sincere wishes that your family time is nourishing to you, as mine is for me.
:-)
Posted by DJan at 4:30 PM