A couple of great movies 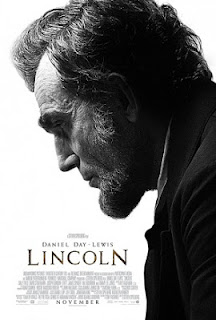 This week I have gone to two different movies with my family here in Texas. The first is Lincoln with Daniel Day-Lewis and Sally Field. I think I can say without reservation that Day-Lewis' performance is without parallel in any movie I have seen for such a long time. He didn't just act the part, he BECAME Lincoln.

There were some uncomfortable moments in the movie when they portrayed the awfulness of the Civil War, with graphic scenes reminding the viewer how much more personal warfare was when men were grappling hand to hand with bayonets. And the scene where Lincoln rode in on horseback surveying the battlefield... oh, that broke my heart.

But the parts that were incredibly fascinating were there, too, seeing the way politics worked back then. Even though I knew the outcome of the vote to pass the 13th Amendment, in the movie it was so well done that I held my breath as the votes were cast. If you get a chance to see this movie, I don't think you will be disappointed. Not to mention if you are an Oscar aficionado, you will be required to see this one because it will receive all kinds of accolades. It is a movie I would see again, even with the violence, which was not gratuitous but necessary to understanding the decisions Lincoln made. 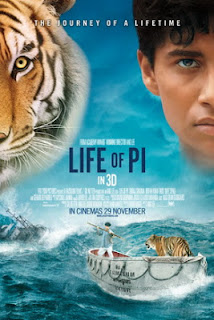 The other movie we saw together is The Life of Pi. It is based on the 2001 novel by Yann Martel and was made into a 3-D movie. You don't have to see it in 3-D, and since it had just been released and it was the day after Thanksgiving, we saw the 2-D version. It was still very crowded but nowhere near as much.

What can I say about this movie? It thrilled me in every aspect. Even though we didn't get the extreme effect of being inside the movie, it didn't detract from the experience at all. The visual elements are breathtaking in any dimension. The story was enthralling, from start to finish.

When I came home and read reviews of the movie, I realized that much of it was computer generated, and I had no idea which parts were real and which were not... it didn't matter to me at all, and I am indebted to the producers and directors for creating a film that tells a great story and gives it to us as a treasure.

I was reminded of Avatar when I saw it because of the lushness of the landscapes that were created, but this movie has something more: a strong message about religion and God that resonated deep within me. Some of the reviewers disliked this part of the movie, but I myself found it to be essential. I downloaded the book onto my iPad so I can read it during the long journey home on Tuesday. I peeked at it and was quickly drawn into the book, so I closed it to stop myself from reading it right then. It won the Booker Prize in 2002.

I will see this movie in 3-D with my partner when I return home. It is a movie for the ages. There's not much more I can say without giving away the plot (which is available on that Wikipedia link above if you want to read it), but I cannot praise either movie high enough. As different as they are from each other, they are both well worth seeing. Enjoy!
:-)
Posted by DJan at 5:19 AM