This past weekend Al sent around one of those emails to the Senior Trailblazers asking if anyone might be interested in heading up to Church Mountain today, on the schedule for this Thursday, to assess the current conditions. Last week he and Steve pronounced Hannegan Pass way too difficult for the entire group. Today, three of the female variety of Trailblazers answered his call: me, Jonelle, and Mary. 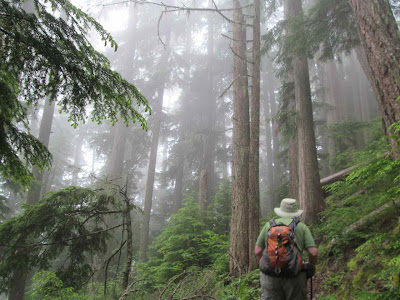 It was not the bright sunshiny day we were hoping for, but the fog and mist made for a pleasant upward hike. We didn't run into snow until we had climbed most of the way to the meadow, where we hoped to stop for lunch. We had about 300 feet of elevation to climb through snow. It's not a long hike when you can't climb to the top, only a short three miles or so, but we went up a bit of elevation, 2,400 feet to be exact. Last year we went up this hike in the middle of July but only got to the meadow. This link has an interesting picture comparing our first attempt in 2011 with the one in 2010 on almost the same date. Today was somewhere in between. Here's our lunch spot, which should cool down those of you in the oppressive heat. 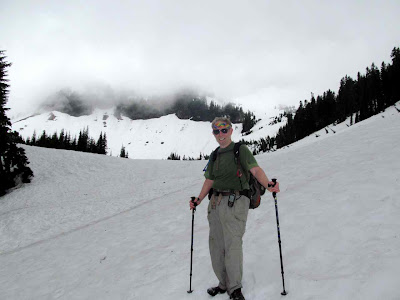 We had just reached the meadow, and as you can see we had little view. Al is wearing only a t-shirt, because we were working hard going uphill, but once we stopped for lunch we donned all the warm gear we had brought along. 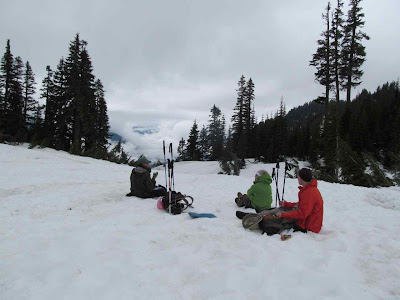 Here were are bundled up to stay warm, looking out at the limited view. Mt. Baker is out there somewhere, and hopefully when we try this again on Thursday you will be able to see it. There was no breeze and we had a marvelous lunch and satisfying conversation before heading back down. I asked Al to take a picture of the three of us women, so I can show everyone that Jonelle and I do resemble each other, but we both have quite different looks. After last week's hike when I put up some pictures of Jonelle, many mistook her for me.
Even with all that snow, it really wasn't cold, but we did need to put on our warm gear in order to stay that way. We remarked on the fact that as we were getting ready to head back down, the sun kept trying to break through the clouds. We had fog and snow, but a very pleasant temperature during the entire day. On the way back down, the sun broke through long enough for me to get this picture of Al: 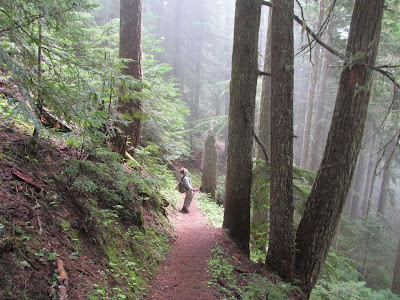 Al was very pleased with the hike and said it would be fine for the entire Trailblazer group to join us on Thursday, since we are only intending to make it to the meadow. Last year toward the end of August we made it to the actual summit of Church Mountain, giving us the full nine miles and 4,000 feet of elevation gain and loss. Here's the link. Although it's a hard hike, the payoff is tremendous. As you can see, if you look at the first link I provided here and the second one, the difference between mid-July and the end of August last year was simply amazing. I'm wondering what the difference will be three days from now. Stay tuned!
:-)
Posted by DJan at 4:45 PM