Al and his gal pals

Today six Senior Trailblazers showed up for our hike (rated HARD) to Excelsior Pass. Other than Al, we were all of the female variety of hikers. We knew that the route to the summit of Excelsior Pass would be accessible, since Al, Jonelle and Fred had given it a try last Sunday and made it all the way to the pass, but without any view. Al wrote a blog post, complete with pictures, here.

We hit the trail around a quarter after nine, and Noriko decided after an hour or so to hike at a slower pace, since she was beginning to have the beginnings of a cramp in her calf. The rest of us continued on the uphill shady trail before we broke out of the occasional snow patches. The trail was mostly clear, but there were a few segments of snow remaining, although Jonelle and Al said much of it had melted since last Sunday. The sunshine was relentless, once we left the trees. And the glacier lilies: 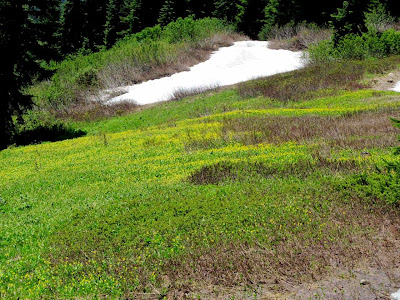 I know this picture doesn't do justice to the amazing profusion of glacier lilies, which appear for a short while from under the snow fields and are gone again until next year. Once we got to Excelsior Pass, after four and a half miles and 3,500 feet of elevation gain, we had the most magnificent view of one of my favorite sights: Mt. Baker. 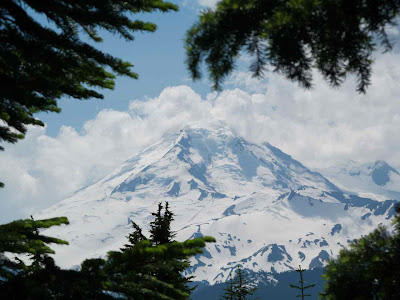 I love this mountain. This was taken from our lunch spot. We reached it around 12:30pm, and all of us were ready for a break. We knew that Noriko was still heading up to the pass and that if she didn't make it all the way to the top, we would pass her on our way back down. Our lunch spot had a wonderful breeze keeping us cool the entire time. It was very gratifying to have made it to the summit, after two earlier tries when we had been turned back by the snow. 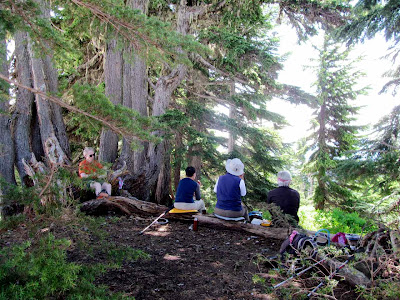 Although you can't see it in this picture, we had a great view of the mountain while the breeze kept us nice and cool. The view in the other direction was of the Canadian mountains, which is nowhere nearly as spectacular as our Mt. Baker view. But it was so nice to finally have made it to the top. I asked both Peggy and Al to take a few pictures of me to prove that I was there, too. This one (by Al) was the best of them, so I just have to show it to you. 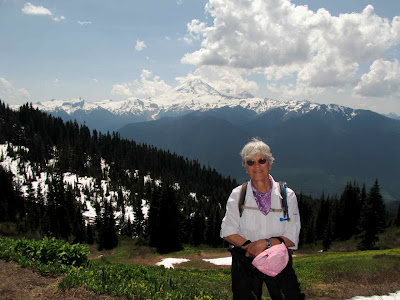 See? It's ME, Mt. Baker, and my pretty 2012 pink sparkly hat. It was one of the best days I've had in quite a while, and now that I've shared it with you, I can head to the shower to wash off the bug spray and sunscreen. Until our next adventure, I hope you are having fun, too!
:-)
Posted by DJan at 6:38 PM