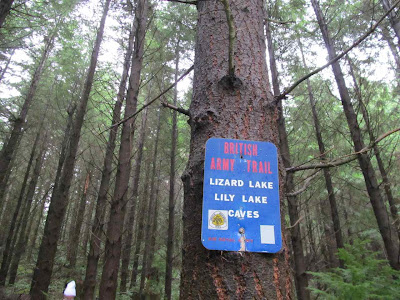 When I left the house this morning, wondering if I had lost my mind, the wind was blowing 25-50mph and the rain was coming down hard. Imagine my surprise to arrive at the Senior Center to find eight other Trailblazers, determined to make the best of the day. We carpooled to the trailhead and, lo and behold, the rain stopped, and we were protected from the wind by Blanchard Mountain. Lovely!

This was my first hike on this particular trail on the north side of Blanchard Mountain. It leads to some familiar friends, Lizard and Lily Lakes, which we visit several times every winter season. But we had never gone up this way before. I asked why it is called the British Army Trail and nobody knew the story right off. Thank heavens for search engines, again! I found this information on a Seattle Post-Intelligencer article written in 2000:


A trail continues around the left side of Lizard Lake, passes a large boulder to become a section of the Pacific Northwest Trail (PNT). This trail leads to the newly constructed British Army Trail, built by visiting British Army soldiers and PNT volunteers.

It is no longer "newly constructed" but is in very good condition and was a pleasure to hike. That description started from the lake and returned down to the Pacific Northwest Trail. We started the hike, however, on an old logging road that looked more like a stream. 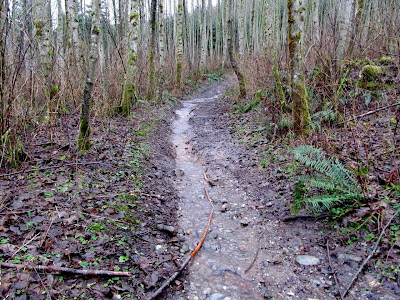 We were ready for the rain that didn't show up, but we had plenty of mud and water to navigate on our way up to Lizard Lake. Although it didn't rain, we could hear the wind howling in the distance and had occasional misty moments. 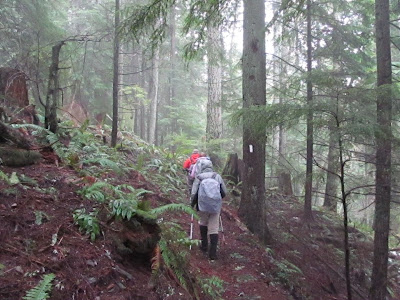 You can see the blaze on the tree; the British Army Trail was heavily marked, and we wondered if people might use it at night, accounting for the many blazes. We finished the outbound part of our hike when we reached Lizard Lake, which had some snow on it, as well as beaver activity. 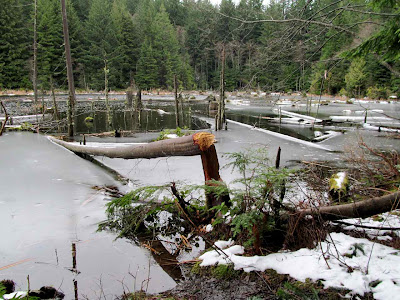 After a quick snack, we turned around and headed back to the cars. We had made arrangements for a party at the Senior Center, a potluck hosted by Amy, to celebrate the birthdays of Karen and Marjan. Amy never misses a birthday, and she's traveling soon, so this worked out great. After we had covered almost nine miles and 2,000 feet up and down, we all met back at the Center to share our goodies with one another. 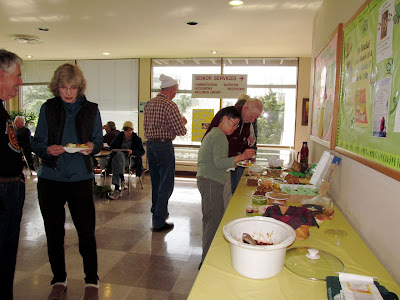 We dug in and visited with each other for awhile, then cleaned up and headed home. It's now almost 4:00pm and I'm tired and satisfied from another day well spent, in the company of dear friends. Somebody is watching out for us: a day that showed every indication to be a true "washout" turned out to be a successful, beautiful day!
:-)
Posted by DJan at 4:02 PM