Twelve of us met to hike to Noisy Creek, one of our favorite and most beautiful places to travel. It's a long drive, more than 70 miles from Bellingham, and Rita brought two friends along who are visiting her from Virginia. They had never experienced the Pacific Northwest and I believe they had a day to remember. I know I did.
The scenery was more than lush, temperature in the low to mid-seventies (a little on the warm side for those of us accustomed to cooler weather), a stray cloud now and then, and everything green and abundant as we hiked from the trailhead to Noisy Creek. This hike takes us along the east side of Baker Lake until we reach the Noisy Creek campground. We saw several people hiking out after having spent a night or two at the campground. We crossed a suspension bridge to reach our trail, and our first major stream crossing was at Hidden Creek. After having full sun and feeling a little warm, once we reached this crossing, the temperature dropped by several degrees!
After this well-constructed and sturdy bridge, we still had to cross several more streams that didn't have the luxury of a bridge across them, and we all found our trekking poles to be more than a little valuable to navigate them.
I wish there were some way to communicate what a wonderful time we had, all twelve of us, as we laughed and trudged our way to the campground. It's funny: traversing the more than four-and-a-half miles to our destination felt like a piece of cake. But we still had to return, and it seemed it would be a moderately easy day. But then we decided to hike an extra half-mile to look at the oldest of the old growth trees in the area. It was a very steep quarter-mile upwards, but well worth it to pay homage to these old trees, which have never been logged and could be as old as 2,000 years!
We not only had these wonderful trees to enjoy, but also some spectacular views of the east side of Mt. Baker. Bellingham lies directly to the west of this view of Mt. Baker. We never see this side unless we travel all the way around. There is a vent between those two peaks on the old volcano that spews steam now and then. 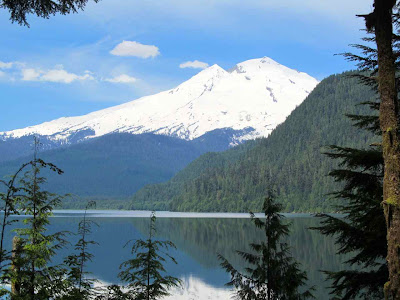 Those little puffy clouds were formed from that vent, and they continued to form the entire time we were there. That low spot between the two peaks is where the steam formed. We could see it quite clearly; it was pretty wonderful to see. 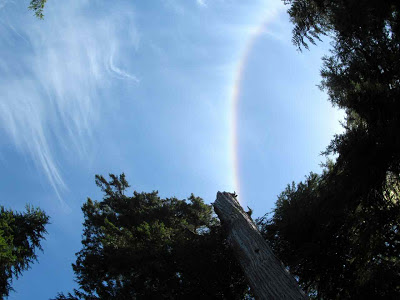 Once when I looked up to capture a picture of a big tree, I saw this rainbow, which I think probably continued right around the whole circle of the sun, but I can't be sure because this is all I saw. Isn't it cool? Maybe one of my readers knows what caused me to see this, I sure don't.

All in all, by the time we had finished our rather long day, we had covered around ten miles and traversed around 1,200 feet up and down. It wasn't an easy day, but it was filled with amazing sights, wonderful company, and more than I could have hoped for on the first week in June!
:-)
Posted by DJan at 7:20 PM