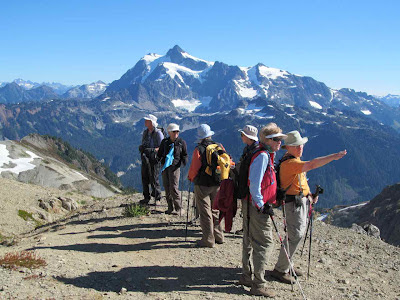 Today ten Senior Trailblazers drove in three separate cars to Artist Point to begin our trip to Ptarmigan Ridge. In the picture above, you can see that we had magnificent views of Mt. Shukan today, as well as abundant sunshine on this hike that offers no shade whatsoever for the entire time we were out on the ridge. In the picture above, we had already hiked more than three miles and were just about to begin to follow the ridge to Camp Kiser, five miles from the parking lot and right to the base of Mt. Baker. I knew at the outset that I wouldn't be making the entire trip, since a few of us needed to get back earlier. We decided that three of us we would turn around after lunch at 1:00pm and head back to our car, while the others would go on. 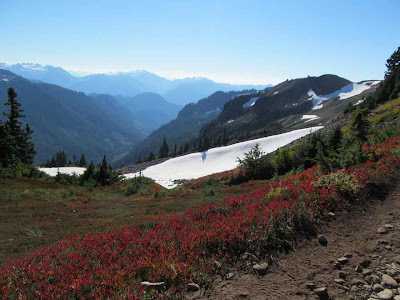 The views were spectacular, and the fall colors blended with the skyline and snowfields left over from last spring. We were surprised to find this trail as free of snow as it was, but we still had to cross several snowfields that were hard as concrete. Last night must have been a really hard freeze up here, because our hiking poles didn't even make a dent in them. Some were pretty scary, but we knew that when we returned the sun would have softened them a bit. 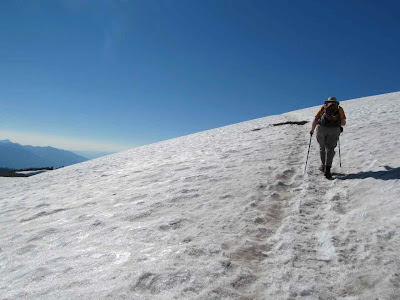 As we followed Al up this snowfield, I thought it looked like we would be walking off the edge of the earth. But of course we didn't, and as we rounded this corner, we saw the final destination of our hike today. That's Ptarmigan Pinnacle on the right and Mt. Baker on the left. If you look carefully at the picture, you can see the faint trail that would take my fellow hikers to their destination. 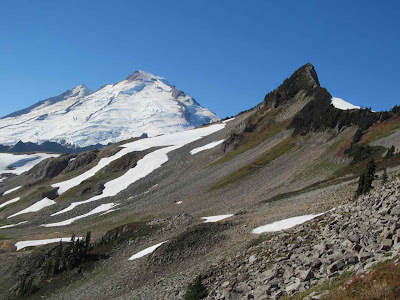 We made it to a grove of trees that sheltered us from the cold wind and had a brief lunch, before Norm, Liz, and I turned around to head back. The other seven went the other way, and as we made our way back we met dozens of people heading up. It was such a beautiful day that I'm sure there were plenty of people with indoor jobs that simply blew them off and headed up to the High Country. The other seven ended up hiking more than ten miles round trip, but the three of us went somewhere around nine miles. I found this description of the entire hike here. 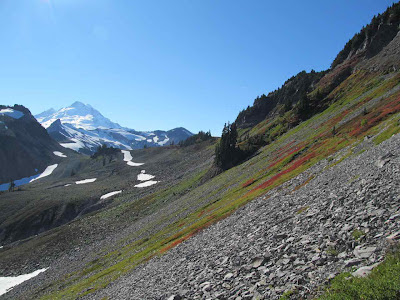 Just a few minutes before the three of us reached the parking lot, I looked back to take a last look (for today) at Mt. Baker shining in the distance, with the fall colors and our trail on the right. It was a simply wonderful day in the wilderness with my friends, and there was just one other great experience that I had to share: on the drive up to Artist Point, the three of us in Norm's car saw a mountain lion cross the road in front of us! It was huge, obviously a male, a magnificent cat that covered half the road before disappearing in the trees. We could not believe what we had just seen, but each of us agreed that it was a big cougar no more than a few car-lengths away from us. What a treat! And with that last thought, I leave you as I go to pack for tomorrow's adventure to Vashon Island!
:-)
Posted by DJan at 6:24 PM