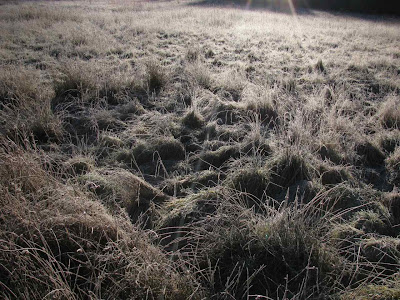 I took this picture of the frosty field across from the parking lot where we started our hike this morning. It was in the low to mid-20s all day, never warming up very much unless we were in the sunshine. Although there wasn't a cloud in the sky, most of the day we hiked on shady wooded trails. Thirteen of us showed up for the last hike of the year. We were dressed for the cold, so nobody suffered too much, until we had to cross Olsen Creek. The rocks had a coating of sheer ice on them, and a few people got wet feet, but most of us made it across with only a little difficulty. 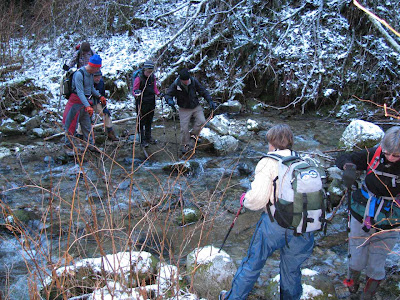 If you look closely at the rocks, you can see how treacherous the crossing was. And there is fresh snow on the foliage. The water in my Camelbak bladder kept freezing up and I had to suck really hard to get the ice to flow through. After crossing this creek, we had a very steep hillside to climb, more than 500 feet almost straight up, it seemed. We reached a trail we had never hiked before and decided to follow it, since it was rumored to end up at a familiar trail. However, as we began to descend, we realized that we were not going to have much of a view and finally opted to have lunch when we found a moderately sunny spot. 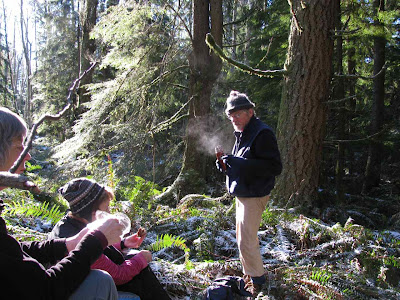 You can see the steam rising from Frank's hot drink and the icy ferns surrounding our lunch spot. I also had a nice cup of hot tea and found it still piping hot even after three hours in my backpack. There's a good reason to preheat a thermos; noting tastes quite as good as a hot drink in the middle of a frozen landscape. We didn't stay long, as we began to feel the cold seeping through our clothes, even with little wind. 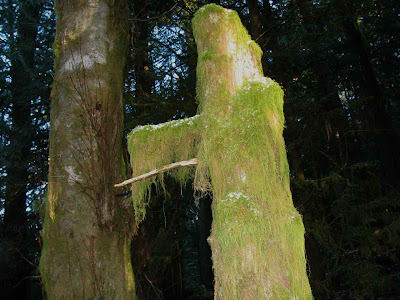 We laughed at this moss-covered signpost. I think (but I am not sure) that there is an actual sign under there, but who knows for sure? At least it was interesting to look at, and if you enlarge it you can see a few flakes of snow on it. We knew we were in the general vicinity of a logging road as we began to see a familiar clearcut showing through the trees. When we got to the road, it was the only view we had all day. 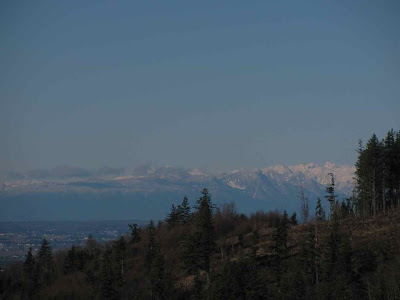 These are the Canadian Cascades you are looking at, showing as well as our beautiful cloudless sky. By the time we reached our cars, we had covered eight miles and more than 2,000 feet up and down. We were all very happy to have had such a wonderful hike with good friends as our last outing of 2010.

Tomorrow and Saturday are also projected to be clear and cold, so I think I will head down to Lake Padden on New Year's Day to watch the Polar Bear Club this year. Last New Year's the temperature was in the 50s when they dashed into the water, but this year it will be in the teens! Should make for some excitement!
:-)
Posted by DJan at 4:05 PM