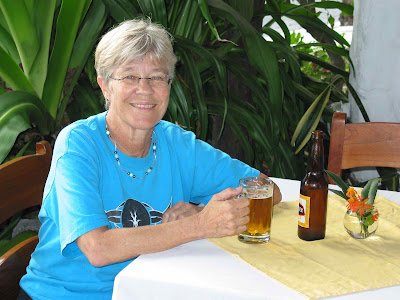 Me in the Galapagos Islands enjoying a beer, September 2004
A few of my blogging friends have raised some questions that made me think. First, Nancy at Life in the Second Half asked about five-year plans, and wondered if any of her readers do such things. Of course the comments are all over the place, but I thought about going back five years and figuring out if I thought I knew I'd be here, now, doing this "plan."

The answer is, I didn't have a clue. Five years ago was September, 2004. I was in the Galapagos Islands acting as the organizer for a meeting that was orchestrated and hosted by my ex-boss, Mickey Glantz. I had arranged for 35 scientists to come from all over the region (and from the United States) to attend a conference on El Nino Early Warning and Sustainable Development. This link takes you to the website that I developed for the meeting, along with the help of my right-hand person, Anne. After the meeting, I assisted in writing the report on this site.

That kind of meeting, along with editing numerous papers and books with Mickey, were the basis of my job at the time. On the weekends and during holidays, I was an avid skydiving instructor and made 205 skydives during 2004. I had no idea that five years later, I would be retired, having moved from Boulder to Bellingham, also retired from skydiving instruction and only jumping now and then. Five years ago, it was my life. That and supporting Mickey in a more-than-fulltime job. I was busy! No wonder I like my lifestyle so much now. I earned it.

The other blog that has got me thinking was posted by sas at sas' magical mystery tour about her conflicted relationship with her father. This post is called "something nearing closure" and describes her struggle through the years to understand what her life with him was all about. A quote from the post:


But I feel I have to stand up for the little girl I once was because if I don't, then who will?

Indeed. Who will? It made me remember that my father, although in so many ways I had no doubt of his love for his children, was flawed in his ability to understand women and girls. He would be 86 years old right now, if he had lived (he died at 62 of a heart attack). His generation had a totally different way of thinking about women and our place in the world. It reminded me of an event when I was seven: my grandmother was taking care of my sister and me while Mama was in the hospital having a baby. My father came home from the hospital and put his head in his hands. All of us, me, my grandmother, my little sister gathered around him and asked in shocked tones what had happened. Was Mama okay? The baby? And he looked up, stricken, and said, "it's another girl."

I tried to comfort him. Me, his firstborn, not-boy child who had let him down by being born a girl. Not understanding. And when, eventually, he had his son (when I was 16), Daddy was so ecstatic he went out and bought a baby blue station wagon, passed out cigars to all his friends, and felt that now he was a success. That was what he knew. It still exists out there. In China, female infanticide has been practiced ever since the one-child law went into effect.