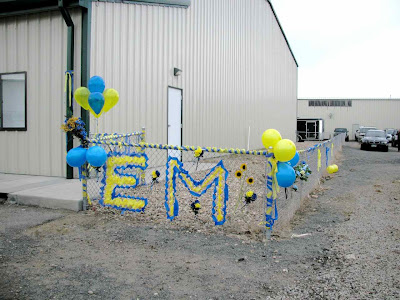 Yesterday I attended the celebration of Emily Berkeley's life, which was the reason for my trip back to Colorado. It was held in a huge airport hangar at Mile-Hi Skydiving, where I spent so many of my skydiving years and all of my instructional ones. As we walked toward the hangar, we saw the fence decorated in Emily's colors, yellow and blue. 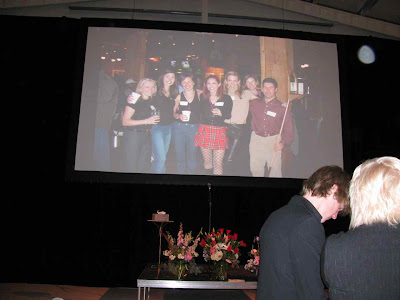 When we walked inside, we saw the setup at the front of the hanger with an enormous screen showing literally hundreds of rotating pictures of Emily through the years. A podium with flowers, a microphone, thoughtful kleenex, were the focus point where many of Emily's family members spoke with such love and emotion about their beloved sister, niece, and cousin. I never knew that she had such a huge extended family, and Lee (she called him Kiwi) had his mother and other family relatives who flew in from New Zealand. They took up the first four rows of chairs, out of more than 300 that had been set up in the hangar.

After listening to the wonderful, funny and heartfelt family memories, we watched an Honor Guard from the Air Force Academy (Emily was the instructor for many cadets) fold and present the triangle flag to Kiwi. Then the back of the hangar opened up and we followed the family out to an area behind to watch a flyover of three planes, all of which she had made numerous jumps from. The picture isn't perfect but it shows the planes, lights ablaze, and every one of us skydivers cried as we watched them fly overhead and then peel off in a beautiful flower. 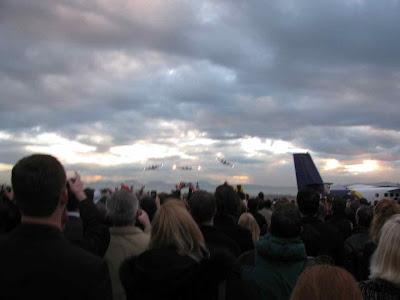 When we went back into the hangar, there was a table set up with all the red wine we had been asked to bring to share, and trays of hot food in three different locations around the inside of the hangar. The mic was opened to any and all who wanted to share memories of Emily. Sarah, my wonderful host, read her tribute and one that Kiwi had written from the point of view of Emily's wonderful dog, Dottie. More than five hundred, maybe closer to six hundred people had come to the celebration. This picture might give you a bit of an idea of the size of the crowd. (Remember you can enlarge any picture.) 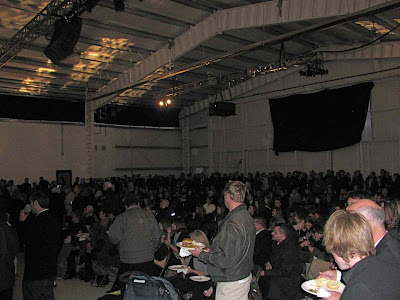 As people ate and drank and things began to become a little less emotional, people hugged and gathered in groups to laugh, cry, and share together. I saw so many people I once instructed in skydiving, and people who have become an integral part of the skydiving scene since I left. My earrings were hugged off. When we got back home I realized they are now somewhere in that big hangar, two heart-shaped earrings that I hope will be picked up by someone as a reminder of the huge heart that Emily had. Four people will live long lives because of the donation of Emily's organs, two of them heart valves. So it is fitting that those two earrings stayed behind in the place where we celebrated her amazing life. 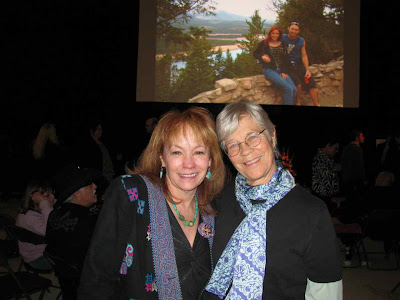 I will treasure this picture forever: it's me with Emily's beautiful mom, with Emily and Kiwi looking over our shoulder from the big screen behind us. Goodbye, my dear friend, I will never forget you and will one day think of you without pain and only remember the beautiful person you will always be in my heart.
Posted by DJan at 8:30 AM