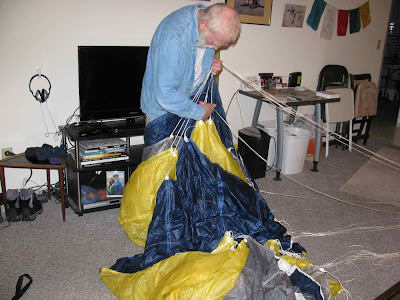 While I was in Colorado, I discovered that one of my hosts, Josh, is a parachute rigger who just happened to have a Spectre 150 in his loft that he wanted to sell. I had been telling him about my fruitless quest to find one. This is EXACTLY the canopy I decided I wanted to fly, because it's much more docile and sedate than my Stiletto 135. While this is arcane information to anyone who doesn't skydive, for me it's the perfect canopy for a little old lady to fly (like me). So I bought it from him and brought it home. I wore most of my heavy clothes on the plane and stuffed the canopy into my carry-on, which was pretty darn puffy but still fit, although I had to sit on it to get it closed.

The Christmas present part is that I asked Smart Guy if he would hook it up to my container as a Christmas present to me. I had little expectation that it would happen quickly, because after all, it's wet and wintery here in the Pacific Northwest, and hardly anybody is jumping, certainly not me at the moment. However, he decided to get the work done now, which is pretty time consuming. He's busy checking the lines to make sure they are correctly positioned before moving on to the next steps. If you were to enlarge the above picture, on the bottom of the TV stand is a picture of us on our anniversary after we had made our tenth wedding anniversary jump. We were married in freefall exactly ten years before, which I wrote about here. 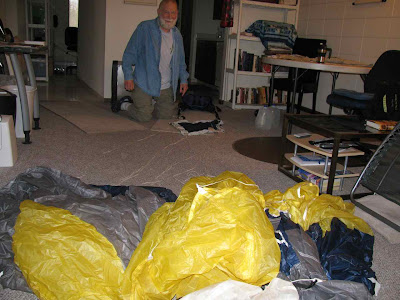 Most skydivers spend their careers learning to fly smaller and smaller parachutes, because the smaller they are, the more high performance they are. If you are still jumping into your sixties, however, it makes perfect sense to move to something that is gentle and forgiving. My Stiletto would sometimes open hard and so I had to be careful with how I pack it; in the days when I jumped a Spectre, I remembered that it NEVER opens hard. In fact, Josh said this one opens "like butter." Who could ask for anything better?

Each canopy has a personality, so even the ones that are the same brand and size are different from each other, and although I really enjoyed the flight performance of my Stiletto, I didn't like the fact that it rarely opened predictably. This one will, and the extra fifteen square feet (the difference between 135 square feet and 150 square feet) will give me even more cushion for landing. I can't wait!
:-)
Posted by DJan at 1:18 PM