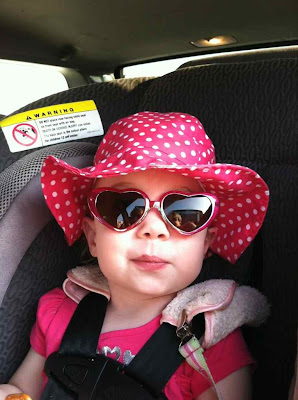 Yesterday, my sister Norma Jean sent me this picture of Lexie, showing that this young lady is going to be dangerous in a couple of decades. Or sooner. Capturing hearts right and left, she's simply adorable! As many of you know, Lexie is my grand-niece, Norma Jean's only grandchild, and truly one of the New Generation. She was conceived using donor sperm and is being raised by a single parent, my niece Allison. I wrote all about it here. I was planning on editing the picture to remove the warning label, but after giving it some thought, I decided to use it as part of the title of this post.

Because of the wonders of technology, I get to see Lexie and her mom on video chat fairly often. She's a toddler now, smart as a whip, and growing by leaps and bounds. Since I talk with Norma Jean two or three times a week on iChat, we swap stories of our lives as well as pictures. She couldn't wait to show me this one. It's definitely a keeper, don't you think?

Today I met a new friend at the coffee shop. I was meditating on this picture while sipping my coffee, and a young dark-haired woman sat down in the adjoining chair. She's obviously in her early twenties, if not younger, and I was thinking about the passage of time, as I often do. Lexie is growing up so fast, but as she ages, so do I. The woman caught me staring at her, and she held my gaze, looking right back at me. I decided to start a conversation. "I was just wondering: when you look at me, do you see an old woman?" She studied me for a moment and shook her head. This began a conversation about how older people become invisible, and she introduced herself to me as Alana (or Ilana, I'm not sure of the spelling). She's indeed 21 and finished her education last fall, majoring in theater, which I find really interesting. I almost asked if I could take her picture for the blog, but instead I gave her my card and told her that if she's interested she could read what I write and even leave a comment if she wants.

Alana (I like that spelling) is working at the YMCA right now and is hoping to be accepted into the Peace Corps. I remember when that was something I considered doing, long ago, and she reminded me that I still can if I choose to. This began a conversation about travel; I am reluctant to travel any more, but she's looking forward to discovering the world and different cultures. She's at the beginning of her adventures, and I am content to be settling into my easy chair (after a good workout, of course).

It was time for me to catch the bus, so we said goodbye. I hope to see her again. What was most amazing to me is that during the conversation, her assurance and direct gaze made me feel I was in the presence of an old soul. Her image keeps creeping back into my mind. When I was her age, I was nowhere near as confident and self-assured as she is. The women's movement hadn't even begun in the early sixties when I was her age. It gives me confidence that we are indeed making some forward progress. Lexie, what will the world be like when YOU turn twenty-one?
:-)
Posted by DJan at 12:49 PM